One of the joys of being a guide in London is the constant discovery of interesting places to take my groups of regular walkers. Since 1996 I’ve been running Discovering London courses  with my colleague Julian. Over a series of 30 weeks spread out between October and June we alternate between inside visits and guided walking tours. On these tours friendships are made and walkers return to us year after year so it can be quite a challenge to come up with new places to visit but we always manage to pull the rabbit out the hat each term with interesting visits that haven’t been arranged before.

In November last year we took  our groups to John Bell and Croyden in Wigmore Street. Established in 1798 by John Bell when pharmacy was in its infancy, the first shop was situated at  225 Oxford Street where Bell mixed up potions in the basement, keeping a journal of the customers he served and the preparations he made. 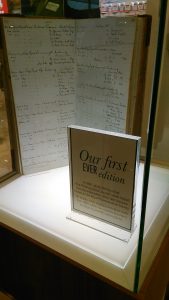 In 1841 his son Jacob who eventually took over and expanded  the business founded the Society of Apothecaries. Proximity to Harley Street provided a good supply of medical customers. Having merged with Croyden and Co founded by one of Bell’s former assistants, the chemist moved to its present Wigmore Street address in 1912. Although  now part of a larger company, the shop retains its character and Manager Doug Creswell who showed us round was knowledgeable about the shop’s heritage.

As we entered  the first thing we noticed was a replica of the old Oxford Street shop. The model was made by Gerald Hector, son in law of George Percy Denton who worked there as a delivery boy in 1905. Gerald’s daughter Susan was given the model in 1995 and she set about furnishing it, commissioning furniture and dolls from specialist craftsmen. After her father’s death Susan loaned it to the shop where it has pride of place near the front door. 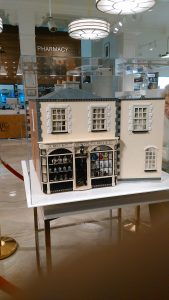 When the shop was purchased by new American owners they decided to modernise the store to appeal to today’s up market customers. I was sad to see the old fixtures and fittings disappear but am pleased to say that the management are still proud of their long history so items such as this mortar and pestle for mixing pills are displayed in glass cabinets throughout the store. 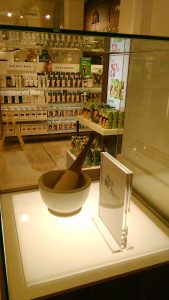 The shop has many famous clients including shopping guru Mary Portas, Madonna who owns a London house nearby, Sir Paul McCartney and Tina Turner. Members of Middle Eastern Royal families drop by when they are in town and the custom of our own Royal Family means that the shop can display the coveted Royal Warrant. They provided the anointing oil for the Queen’s coronation which is also on display. 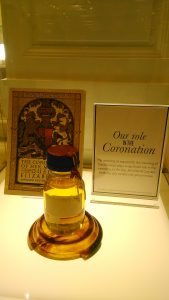 You won’t find Her Majesty walking round the store though! John Bell’s staff will go to the Palace to deal with royal requests.

Due to the upmarket nature of their clientele, the manager has to make sure that he always has the latest items on show. Whether it’s gym equipment or this pink “bling” mobility scooter, there’s always something to catch the eye. I tested it out with an eye to the future when I’m no longer fit enough to lead my tours on foot! 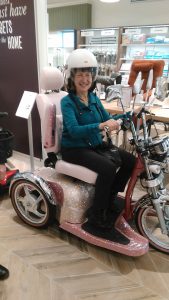 To learn about my walking tours and “behind the scenes” visits email me diane@secretlondonwalkingtours.co.uk. You can either join the regular programme that I run with Julian or, if you can’t commit yourself to a weekly programme, sign up to my mailing list to receive details of “one off ” walks and visits. I look forward to seeing you on future tours!